Remember, Remember, The Fifth Of November 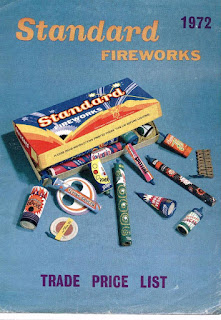 In a nostalgic moment earlier, I remembered our family bonfire parties in Clifton Campville back in the 1960s and early 1970s. We'd take it in turns to host the party with our neighbours opposite, The Cuffes. We both had a fair bit of land on which to erect a big bonfire and the neighbours in our street would all club together to buy the fireworks. Our mums used to put on a fine spread, including lots of potatoes wrapped in foil to cook on the bonfire, served with lashings of butter.

Tonight, for the very first time, we will have fireworks in the garden. On a whim, my husband, Nige, announced this morning that he was off to buy some. I put it down to the strong anti-biotics he's taking.

I had baked potato for tea, albeit done in the electric oven and served sans beurre and with Branston Pickle, salad and ham, not a whiff of foil in sight.

And finally, here's a Flash Fiction I wrote a few years ago in remembrance of those lovely family bonfire parties.....

Jumpin’ Jacks lie like coiled worms on the rickety camping table underneath the kitchen window.
Mum is wrapping jacket potatoes in tin foil ready to put on the dying embers of the bonfire, and Dad is lighting the Catherine Wheel. The Standard Firework box is almost empty. There’s just the Mount Vesuvius, a cone-shaped firework Dad always saves till last; a Spitfire and a Flying Saucer.
I hope Toby arrives in time for the Jumpin’ Jacks. I love the way they chase us round the lawn.
“Come and grate some cheese for the potatoes, Diane!” Mum shouts.
It’s only when I’m through the back door that I hear a whistle from the garage. Toby must be hiding. He’s four years older than me and teases me all the time. Last week he set up his army play-tent in the kitchen and said he’d give me a tenner if I showed him my privates. I hid the brown note in a pink Tupperware box in our pantry. Mrs Crowther still hasn’t asked for it back.
I grate the cheese, then skulk off to find Toby. He’s sitting on an oil drum holding a lit sparkler. It’s dangerous and thrilling at the same time. Just the two of us in the garage with the fireworks.
“Which one shall we light first?” he asks with a grin.
I point with a trembling finger, then run.
We never did see the Jumpin’ Jacks. When Mount Vesuvius erupted, Toby turned to ash.