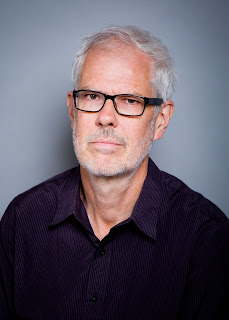 It has been a while since I've had a guest on my blog, so I'm delighted to welcome Jonathan Pinnock. I first came across Jonathan when his short short collection, Dot Dash was published by Salt. It's a stunning collection, so I was intrigued when I discovered he had written a new novel, The Truth About Archie and Pye.

Hi, Jonathan! Welcome to my blog. It’s been a while since we were both on the reading team for the Bath Short Story Award. How did you find the whole judging experience and would you be on the reading team again?
As it happens, I was on the team again this year! I find it absolutely fascinating being a first-stage reader for a big open competition like that, because you can get literally anything coming at you. The range of quality is quite remarkable, and it can be really exciting when something really brilliant leaps out at you, as it did two years ago when I spotted the story that eventually went on to win. Even the really terrible stories are instructive, because they force you to analyse exactly why they are so terrible.
Are you an avid reader? How much time do you spend reading compared to writing?
Ooh yes. I can’t say for sure what the ratio is, but it’s close to parity. Never trust any writer who doesn’t read.
Who are your favourite writers and do you read more short fiction than novels?
I’m not entirely sure I have any favourite writers as such, in the sense of wanting to grab anything new of theirs as soon as it comes out - although Alison Moore comes close to that category and Jon Ronson does in the non-fiction world. The best book I’ve read this year by a country mile is Jon McGregor’s Reservoir 13, which surprised me because I’d previously only read his short fiction, and I didn’t quite engage with that for some reason. Maybe I should try again. Generally speaking I read a mixture of novels, non-fiction and short stories, so there’s no hard and fast rule. I go high-brow, low-brow and everywhere in between.
What inspires you to write? Do you keep lots of notebooks?
I don’t do notebooks. For short stories, I generally start from a prompt or an idea that appears from somewhere and see where it goes. I don’t plan.
Was there anything in particular that inspired you to write this particular book?
Very long story, which will probably be covered in an entire post elsewhere in this blog tour! The short version is: a prompt inspired an entry to a web forum short story competition. That ultimately got read at Liars’ League and published in my collection Dot Dash. Then I was frantically scrabbling around for something to write on my MA course, and I remembered this and based an entire novel on it.
What is your take on self-publishing?
I imagine it’s a hell of a lot of work, and very, very lonely. However, one of the most interesting books I’ve read this year was self-published (on Bitcoin and blockchain and all that nonsense), so I am not against the idea at all. But what I love about working with my current publishers, Farrago, is that they take care of the professional stuff such as editing, proof-reading, cover design and promotion via NetGalley etc. – stuff that I’d be tempted to skimp on if I were paying for it myself.
Have you got an agent and if not, have you tried to get one?
No, and oh, God, yes. Unfortunately, no-one is interested in taking on clients who write humorous thrillers at the moment. Or it could just be me.
What advice would you give new writers?
It’s that line from Galaxy Quest: Never give up, never surrender!
Do you still enter short story or flash fiction competitions? Do you think they are worthwhile?
I’m on a sabbatical from that sort of thing right now. But I will probably come back some time in the future. They have been massively worthwhile in the past, however, for many reasons. Probably the most important one is that success in competitions gave me the confidence to keep going (see the Galaxy Quest quote above). 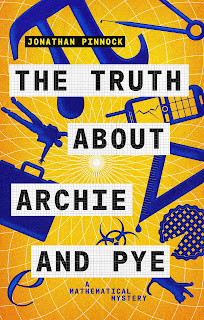 Is this your first novel?
No, it’s my second (the first one was Mrs Darcy versus the Aliens).
What’s next? Have you got something in the pipeline?
The deal I have with Farrago is for two books, so I’m currently hard at work finishing the sequel, which will be out next year.

The Truth About Archie and Pye is available from amazon.co.uk

Something doesn't add up about Archie and Pye ...
After a disastrous day at work, disillusioned junior PR executive Tom Winscombe finds himself sharing a train carriage and a dodgy Merlot with George Burgess, biographer of the Vavasor twins, mathematicians Archimedes and Pythagoras, who both died in curious circumstances a decade ago.
Burgess himself will die tonight in an equally odd manner, leaving Tom with a locked case and a lot of unanswered questions.
Join Tom and a cast of disreputable and downright dangerous characters in this witty thriller set in a murky world of murder, mystery and complex equations, involving internet conspiracy theorists, hedge fund managers, the Belarusian mafia and a cat called µ.