Guest Blog: Tracy Fells Talks About the Transition from Writing Short Stories To Writing A Novel 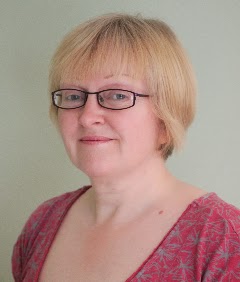 Today I’d like to welcome the talented short story writer and novelist, Tracy Fells to my blog. We enter many of the same literary competitions, and I’ve followed Tracy’s writing career with great interest. I’m always fascinated by the transition from writing short stories to writing a full-length novel, so when I heard that Tracy had written her first novel, I wanted to ask her how she found it.

After writing so successfully for the short story market, what made you want to write a novel?
Well, I have to admit sometimes I don't feel all that successful! Before starting to write seriously, I did write a novel - one of those bottom drawer efforts that should stay in the bottom drawer. It was dreadful and I decided I needed to learn the 'craft' of writing before attempting anything longer. So I started writing short stories and flash fiction ... and got hooked. An idea for a longer piece was always niggling away in the back of my head and I guess I wanted to prove I really could write something decent that was longer than 4,000 words. But sadly, I also think there is terrific pressure on a short story writer to write a novel. Every one kept asking: 'Are you writing a novel?'. It's the same with Literary Agents - they're not interested in a short story collection and just want to know if you're writing 'something longer'. As if short stories don't count. I find this quite depressing, but it is the reality of the publishing world right now.

I know just how you feel about that pressure, Tracy! It's such a shame that short stories don't carry the same weight as the novel. Short stories are becoming increasingly popular genre with readers. So, did your novel spring from a short story you'd written or did you have a totally separate idea bubbling away in the background?

That's a good question. It was always an idea for a novel because it is a complex story with many characters. At first I found it hard to pick up the momentum (or energy) to work on something that was going to be >80,000 words (which seemed both terrifying and impossible). To make the task easier, or more achievable, I started to write a series of short stories based on characters from the novel. Not the main characters, but lesser ones who had interesting back stories to tell. This really helped to make progress with the main narrative, as I was able to weave aspects of the short stories into the novel. This also worked wonders with achieving a weekly word count - insert a short story and YAY target done for the week! Can I just add here that one of these short stories went on to be shortlisted for the 2014 Commonwealth Writers Short Story Prize (which is my biggest success to date).

Wow, well done on being shortlisted for such a prestigious literary competition! I like the idea of writing a series of short stories based on characters from your novel. It’s an interesting way of working. Can you tell us what genre the novel is and what sparked the idea?
The genre is a tough one to define, but I think it falls into 'accessible literary fiction', or I'd like to think of it as 'quirky contemporary literary fiction' (trying saying that quickly!). It's a contemporary fairytale populated with misfit characters. The original idea was sparked absolutely years ago and I do mean years. I remember watching a news item, could have been on Countryfile, about how you need a special licence to handle dormice. The wonder on the faces of the conservationists, as they crowded round to see the tiny dormouse dragged from its nest, set off a chain reaction in my head. The memory sat there for many more years until it started to evolve into something that resembled a storyline. To be honest this is how most of my fiction begins. Something I've read or seen on TV or film catches my attention, then festers away in the dark corners of the subconscious before it turns into a genuine story.

It sounds wonderfully quirky! And thank you for giving us an insight into how you're inspired. What aspects of novel writing did you find most difficult? Was it the structure? Plotting? Setting? Viewpoint?

I'm now in the editing stage, so thankfully the bulk of the writing is done. Thinking honestly about this question I'd have to say the plotting has been the most challenging aspect of the writing. From early on I knew the structure and viewpoints that I wanted to work with. But the story has numerous plot strands that had to be woven together and I was terrified of leaving something dangling. I use index cards to help with this. Using different coloured cards for each PoV, I sketched out chapters and then played around with order. However, once I seriously got underway with the writing I completely forgot about the cards! A large whiteboard is also essential for working through character arcs - but so far I've not found one large enough to do the job!

It all sounds like a complicated system, but it's great to get an insight into your working methods. I often think writing a novel is like spinning plates. Did you manage to continue writing short stories while you wrote the novel or did you have a complete break from writing them?

Funny that you mention spinning plates, as one of my beta readers commented on how many plates I had spinning in the novel. I wish I could say I was able to balance all my writing projects, but the short stories and drama all suffered. At first I tried writing one chapter a month and continued to work on short fiction, but the novel was progressing so slowly and the writing felt disjointed. Other writing friends kept nagging that the only way to make progress was to complete absorb myself in the novel. They were right. As I'm also working on a part-time MA in Creative Writing (at Chichester Uni), I decided to devote the summer recess of June-September to writing the novel. I was able to write >60K words and get the bulk of it done. The sacrifice was giving up the short stories for that time. And I went a bit cold turkey ... when the MA term started up again I was gagging to get back to writing short stories. I wish I could find the perfect balance, but so far the two writing forms have to be kept apart. For me, anyway.

Yes, I know what you mean. I find it difficult to write short stories alongside the novel, but the novel always seems to lose out! You wrote 60K in a very short space of time. Well done! So, you say you're now editing your first draft? Have you already started approaching agents or will you wait?

I found the trick was to break down the word count to a weekly target and then a monthly target. I found I could write 20K words a month. Yes, I'm now on third draft. I've actually been approached by a couple of agents asking to see extracts. At present I'm trying to come up with a list of agents who I'd love to work with. When I have a polished, gleaming mss then I will begin to send it out. That's the horrible bit and I'm planning to postpone it for as long as possible. Having invested so much time and effort into the novel any rejection will be painful. Bit like someone telling you what you they think of your beloved offspring ...

I know! That awful fear of failure. So, how did you manage to get agents approaching you? Was it a result of your Commonwealth shortlisting?

The Commonwealth shortlisting helped. Well, tweeting about it on Twitter helped. Top tip: shout about any successes, as you never know who's listening. Also making it onto writing competition shortlists will get your name and writing noticed. One agent contacted me after reading a shortlisted story on a website. They then read other work of mine online and liked my voice. I never believed this actually happens, but it does. Agents do look for new talent via competitions so use this to your advantage.

That's very useful to know! What about the dreaded synopsis? I take it you’ve written one? How did you find that experience? Any tips?

Well, there’s no magic formula, unfortunately! Like most other writers I hate this part. My beef is that there's plenty of examples to be found of 'good/successful query letters', but rarely does anyone share a successful synopsis. I'm beginning to suspect that's because they don't exist! The jury's still out on whether agents actually read / or take any notice of them either. But my top tips are: Have a selection prepared i.e. the full blown Mslexia version (the template & guidelines are on their website and are excellent), a two-page version and the one page version. Write it early, even before you've finished the novel as this helps you to focus on plot and themes (you can change it later - and you will ... many many times). And remember to get it proofread by someone you trust! As well as Mslexia, I can recommend 'Book Proposals' by Stella Whitelaw, which incorporates a very easy to follow section on writing a synopsis. My writing chum, Wendy Clarke, recommended 'Write A Great Synopsis' by Nicola Morgan. I have this on Kindle but not yet read.

Finally, are we allowed to know what your  novel is called?

The Dormouse Disciples. Can you guess what it's about. Ha-ha!

Erm.... Elephants? I think that wraps it up, Tracy. Thank you so much for being a guest on my blog today and for sharing your thoughts/experiences on novel writing. I’ve found it most inspiring. I wish you the very best of luck with The Dormouse Disciples and can't wait to see it on the shelves!